A Short History of Chimney Sweeping

Chimneys started to appear in Britain around 1200, when they replaced the open fire burning in the middle of the one room house. At first there would be one heated room in the building and chimneys would be large.

Over the next four hundred years rooms became specialised and smaller and many were heated. Coal started to replace wood, and it deposited a layer of flammable creosote in the inside surface of the flue, and caked it with soot.

Whereas before, the chimney was a vent for the smoke now it was needed to draw the fire and this required narrower flues. Even so, boys rarely climbed chimneys before the Great Fire of London, when building regulations were put in place and the design of chimneys was altered, The new chimneys were often angular and narrow, and the usual dimension of the flue in domestic properties was 9 inches (23 cm) by 14 inches (36 cm). The master sweep was unable to climb into such small spaces himself and employed climbing boys to go up the chimneys to dislodge the soot. The boys often 'buffed it', that is, climbed in the nude, propelling themselves by their knees and elbows which were scraped raw. They were often put up hot chimneys, and sometimes up chimneys that were alight in order to extinguish the fire. Chimneys with sharp angles posed a particular hazard. These boys were apprenticed to the sweep, and from 1778 until 1875 a series of laws attempted to regulate their working conditions, and many first hand accounts were documented and published in parliamentary reports.

From about 1803, there was an alternative method of brushing chimneys, but sweeps and their clients resisted the change preferring climbing boys to the new Humane Sweeping Machines. Compulsory education was established in 1870 by the Education Act but it was a further five years before legislation was put in place to license Chimney Sweeps and finally prevent boys being sent up chimneys. 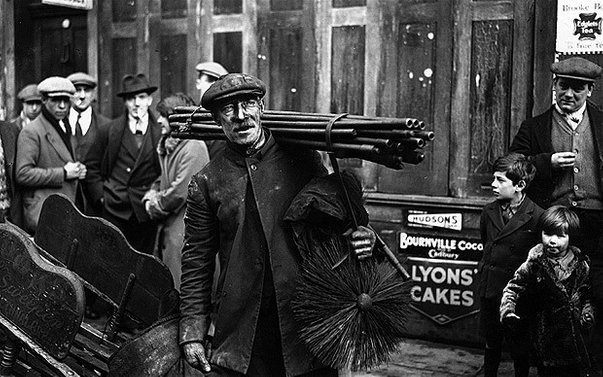 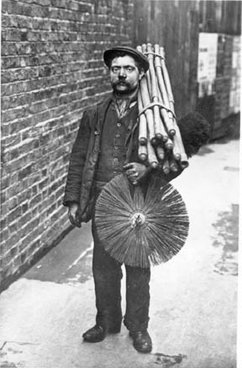